Posted at 10:55h in media, news by andrew herman 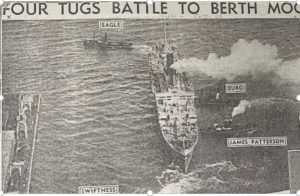 For the first time in this port 4 tugs were needed to berth a mail liner at a Port Melbourne yesterday afternoon when a squally southerly wind held the Mooltan off Station Pier for more than half an hour and a half. The only other occasion when four tugs were called to handle a vessel was when the giant cruise liner Empress of Britain was leaving Port Melbourne early this year. The berthing delay was the climax to a series of misfortunes which delayed the Mooltan for more than a day and a half on her voyage from London. An 85 mile an hour Gale which the liner met near Cocos Islands in the Indian Ocean delayed her for more than a day. Waves 40 foot high swept the decks for 12 hours. In the Australian Bight the Mooltan was delayed by fierce coastal storms. When she arrived off Port Melbourne yesterday the Mooltan was nosed into station pier by the tugs James Patterson and Eagle. A sudden squall blew her away from the berth and the Euro and the Swiftness were called had to be called.